In 1967/68, Renault and Peugeot created the prototype of a representative luxury-class limousine in Project H. Renault, the state-owned company, finally wanted to supply the Élysée Palace. But this did not happen. Nevertheless, the history of the Prototype H study and the cooperation between Renault and Peugeot are quite interesting. Because the engine of the prototype later became the legendary European V6. And with a delay of more than 50 years, Renault presented the study built in 1968 to the public after all.

Last week, we looked at the legendary Europa V6 here on the blog. The PRV engine powered cars for its namesakes and other carmakers for almost 20 years. In addition, the Europe V6 regularly competed at Le Mans, even setting a speed record at the Sarthe. In the meantime, it is considered certain that the cylinder angle of 90 degrees, which is unusual for a V6, was due to the originally planned V8. However, almost all articles on the subject of the PRV lack further information on the originally planned V8 engine.

At most, there are hints that a prototype of the V8 still existed in the engine plant in Douvrin in northern France, where the PRV was built. But an engine is meaningless without the right vehicle. That gave us in the editorial department no peace. So, as car archaeologists, we set off in search of clues. And indeed, with the help of Renault, we found what we were looking for. But first things first, our journey through time starts in the mid-1960s. At that time, the national car markets were pretty much sealed off by customs barriers.

Why did Renault and Peugeot actually cooperate?

These customs barriers prevented real competition. But Europe was in upheaval. On 1 July 1968, the European Economic Community (EEC) agreed on a customs union. With the Customs Union, the six EEC founding states Belgium, West Germany, France, Italy, Luxembourg and the Netherlands abolished customs duties among themselves. The car industry is aware that the Customs Union will intensify competition in the member states in the future. In 1966, Peugeot and Renault set the course with a cooperation agreement that would enable them to compete in the new market two years later.

Part of the cooperation was the engine manufacturer „Compagnie Française de Mécanique“. From 1972, the four-cylinder engines of the Peugeot-Renault X series came off the production line at this factory. The engines with a displacement of up to 1.4 litres initially powered the Peugeot 104 small car. Renault plans to use the engine in the new Renault 14 a little later. Parallel to the small four-cylinder, the larger J-engine with a displacement of up to 2.2 litres was also built in Douvrin. As with the Euro V6, the four-cylinder was modern and advanced aluminium construction.

At least with the small four-cylinder and the PRV, Peugeot’s influence is undisputed. Of course, this immediately raises the suspicion that the plan for the V8 was also Peugeot’s brainchild. At that time, Peugeot was developing the Peugeot 504 series for the upper middle class. The series also included a beautiful coupé. It doesn’t take much imagination to picture this coupé with a V8. That would have anticipated the idea of the Triumph TR8 by almost a decade.

But it did not come to that!

The idea to build a V8 came from the state-owned company Renault. The „Régie Nationale des Usines Renault“ was annoyed that President Charles de Gaulle relied on a Citroën DS for official occasions. Its hydropneumatic suspension was probably responsible for de Gaulle surviving an assassination attempt in August 1962. When French nationalists tried to prevent Algerian independence with 187 shots, they only hit one tyre. This was no problem for the DS, which escaped the attackers with de Gaulle on board without any problems.

In the mid-1960s, the Élysée Palace was looking for a new presidential limousine. Simca had already briefly motorised the head of state in 1959 with the Simca Présidence. But Charles de Gaulle was bothered by the US technology of the offshoot of the Simca Vedette. After all, Simca was still using technology from the Ford Société Anonyme France (Ford SAF), which had once been taken over. Renault assembled Rambler saloons for the American Motors Company for the European market. This, too, was not an option for the patriotic president.

Something had to happen!

Which brings us back to the cooperation between Renault and Peugeot. Because if you look closely at the model range of the two carmakers up to the 1970s, you will find practically no overlap. That was no coincidence! The aim of the cooperation was to maximise sales and even avoid direct competition. Bernard Hanon coordinated the cooperation. Hanon succeeded in getting the chief developers Yves Georges (Renault) and Marcel Dangauthier (Peugeot) to closely coordinate their model planning.

Peugeot and Renault wanted to use as many identical parts as possible in their cars, but without competing directly on two vehicles. The Peugeot 104 and the Renault R14 are prime examples of this French cooperation. As „children“ of Project 121, both are powered by the light-alloy engine from the Peugeot 104, which is inclined strongly towards the rear. The gearbox is located under the engine, which led to the nickname „suitcase engine“. Because the gearbox and engine block looked like two halves of a suitcase when the workshop separated them for disassembly.

Project H starts in the summer of 1966

In addition to Project 121, there were other projects. Project H, or „Code 18“, was to be the top model, suitable as a representative limousine for the French president. It quickly became clear to the partners that the number of units in the luxury class would not be sufficient to develop two different vehicles. The partners assumed that they would not be able to sell more than 150 units per day worldwide. Therefore, in order to save costs, Project H was to produce only one body.

The central question was how to design this body. Renault alone produced three different body versions. All three took the idea of the hatchback further in different ways. Peugeot commissioned in-house designer Pininfarina to design a conventional notchback saloon. In the first half of 1967, it came to a showdown. The three Renault designs and the Pininfarina design entered the competition. Whereby only the Renault hatchback was actually ready to drive.

The prototype drove less then 400 Kilometers

In fact, this design emerged as the winner of the competition. The body of the 4.90-metre-long and 1.88-metre-wide hatchback anticipated much of what was later to become standard in the Renault 20 and Renault 30 respectively. But the real highlights were in the interior. There, Project H was at least a decade ahead of its time. The occupants could adjust the temperature of the front seats and the rear seats differently. Today, this is standard in the form of dual-zone air conditioning.

The rear seats had length-adjustable backrests. These examples show how luxurious the interior was. At most, the dashboard with the horizontal drum speedometer seems a little cluttered from today’s perspective. While Renault took care of design and comfort, the question of the engine lay with Peugeot. There, a 3.5 litre V8 was developed to drive the rear wheels via a four-speed gearbox. In essence, the design was two in-line engines from Peugeot put together to save costs.

After the decision in favour of the hatchback sedan, the arithmetic began. The engineers assumed a production price of 9,600 francs (today about 12,500 €). At the time of sale, Project H was expected to cost an average of more than 19,000 francs (about 25,000 € today). Even taking into account 15 to 20 percent distribution costs, this looks adequate. But the partners kept on calculating. The development costs so far were a good 7.5 million francs (today about 9.5 million €) – two thirds of which were shouldered by Renault.

But until now there was „only“ one development company. The decision-makers knew that it was not yet ready for series production. Moreover, it was clear that the plant in Flins would not be able to build the car. So until production could start, further investments would be necessary to actually build Project H. So the people in charge kept on calculating. In the end, there was an estimated investment sum of 190 million francs (today about 230 million €) before the start of sales.

In view of this amount, justified doubts arose as to whether the project would pay off. Especially since the hatchback design was still a case for enthusiasts in the luxury class at the time. In markets such as Germany, Italy, Great Britain and the USA, the classic notchback dominated. This significantly reduced sales opportunities. Peugeot and Renault ended the project in 1967. Nevertheless, they initially expanded their cooperation and even talked to Volvo and DAF about extending the partnership.

What became of Project H?

The prototype of Project H disappeared into the magazine at Renault. It was not until 2020 that the French carmaker showed it to the general public for the first time at the Retromobile in Paris. It is unclear whether the other prototypes survived. Moreover, they were probably purely show models to establish the shape. Designer Robert Broyer, who designed the interior, attributes the construction of the other prototypes in a book to Coggiola in Italy. Broyer also provided the information that the other prototypes were not roadworthy.

At Renault, the R30 is considered a descendant of the project. The Renault R30 was an innovative and modern car. But with its hatchback and front-wheel drive, the R30 did not fit into the upper middle class of the 1970s. Malicious tongues say that Renault learned nothing from Project H at this important point. In addition, Renault annoyed its partner permanently with the development of the R5, which was created apart from the cooperation and challenged the Peugeot 104. This cast the first dark shadow over the cooperation.

PRV is a result of Project H

Peugeot derived the European V6 from the V8, the V8 failed due to the oil crisis and Renault’s veto. At Peugeot, the Peugeot 604 presented in 1975 is also considered a direct descendant of the project. In fact, the 604 looks like a 20 centimetre shrunken brother of the Peugeot study from the H project. In addition, the management realised that cooperation between independent companies would not work in the long run. When the opportunity arose to buy Citroën, Peugeot jumped at the chance to survive without external partners.

The coachbuilder Heuliez actually created a car for the Élysée Palace based on the 604. But under President Valéry Giscard d’Estaing, the 604 gave way to the Citroën CX Prestige after only one year. Giscard d’Estaing also liked to use the 1972 Citroën SM Présidentielle. And Renault was even allowed to supply the Élysée Palace with the R30 as late as 1981, when Socialist François Mitterrand won the presidential election. 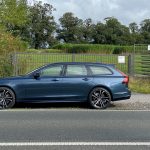